Skip to content
(note! If you’re reading this on Facebook, you may be missing a lot of photos! The cross-post app I’m using is kind of buggy. For best viewing, go directly to my blog, www.minglefreely.com

First it was “The Chicken Dance” trickling over the PA, then an endless parade of Western xmas music, but not by the original artists. I’m talking about where I’m eating breakfast but not staying, let’s just get that straight right away. The Muon Thanh Quang Ninh Hotel (http://muongthanh.vn/, if you’re curious – pictures below) And if I sound a little defensive, it’s only because I don’t really expect to end up paying for this monster spread.

I woke at 5am — like ya do with jet lag; thank you, jet lag, for really maximising my exploits. Dark outside. Wanted to eat.

Woke up the ever accomodating staff (accidentally) so they could light up the (dark) lobby, unlock the (locked and barred) front doors, raise the (battened down) riot gate, and release me with a bag of dirty clothes into the rainy pre-dawn and then lock back up and go back to bed. Great plan!
Apparently I beat everybody else out of bed by about 45 minutes to 4 hours (in my brother’s case). The streets (street, really, there are actually two, if you wanna mince about it) are dark, empty, stone quiet. In “Mick’s World,” (as my loving wife like to describe my improbable notions), I’m going to find a laundromat, something I’ve never looked for, but assume will present itself and welcome me with cheer and maybe breakfast at 5:55am. Not so much.
Fortunately, my path (the street, walking in it) led me to a very giant fancy hotel, lit up, literally, like Christmas. I breezed in (no idea if there’s protocol but I learned to “breeze” masterfully in high school, thanks to being on the newspaper staff, another story another time) and headed for the intoxicating sound of clinking silverware, which was coming from the top of a long escalator, that was not running. That made me think “Goddamn. It’s so early they haven’t turned on the escalator.” Wrong. The energy efficiency over here is beyond. Because, as soon as I stepped on, the escalator revved right up, as ready to accomodate as everything else I’ve encountered in Vietnam. Have I mentioned how much I love it here?
After a 4+ hour motorbike/scooter journey, you see, we’ve left Hanoi behind and are now in the vacation town of Ha Long, a choice vacation spot, I think, for natives and tourists, alike. (I don’t really know; I’m making that up. When you have no idea what anybody is saying, you develop a rich imagination).
The Vietnamese love to eat, this much I’ve figured out. At pretty much any moment of the day or night, you’re within mere feet of a group sitting down (really low on tiny plastic stools, gathered round) or squatting, usually with a bowl of Pho. It does occur to me this very instant that I’ve rarely seen any Vietnamese people standing and eating. But right now? I’m mackin’ with a bunch of Korean tourists. At least that’s the story I invented. I’m definitely the only Caucasian dude and so far I haven’t been called out on the carpet. Or highly polished marble as is often the case in even the funkiest of local hotels. This place isn’t one of the teensies we stay in, though. It’s maybe 30 stories.
What I’m struggling to say is that I’d happily pay for breakfast. Every breakfast I’ve experienced is a giant buffet of All The Foods, and it’s always included in your stay. So my challenge, were I to choose to accept it — and I probably won’t — would be to convince somebody to let me pay, since I’m not a guest here. I just feel like hilarity and confusion would ensue and I’d end up, I don’t know, being taken to the boat that I’d accidentally rented or something.
God, I love it here. It’s finally getting light outside. Here’s what it looks like. 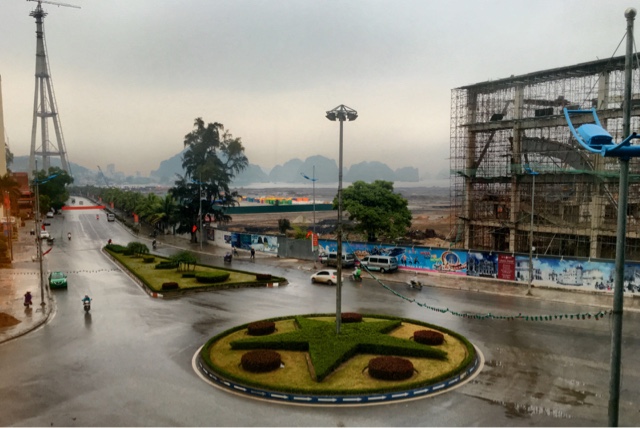 Later this AM, we’re getting on a boat for an overnight cruise to visit those James Bond-like mountains out in the bay. There better be a breakfast buffet on that boat. 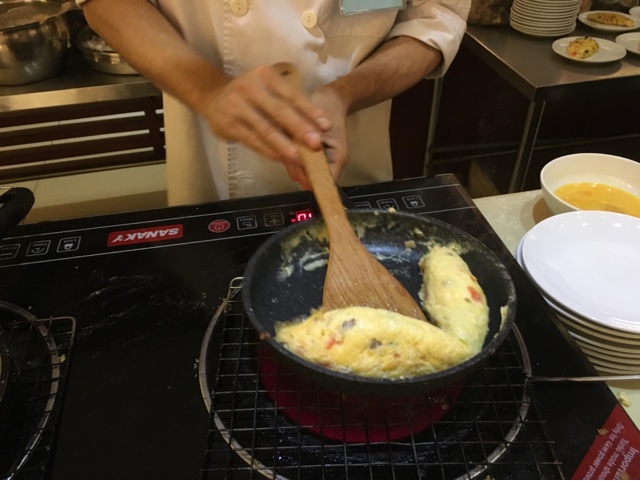 Just realised that the Viets make omelettes in a distinctive way — basically  making scrambled eggs and then kind of rolling/nudging them into a fat spliff sort of shape. No flipping was involved.
I’ve got lots more to say. I always have lots more to say. But right now, I’ll say: “Best day of my life so far.”
Some pics of my ill-gotten eats: 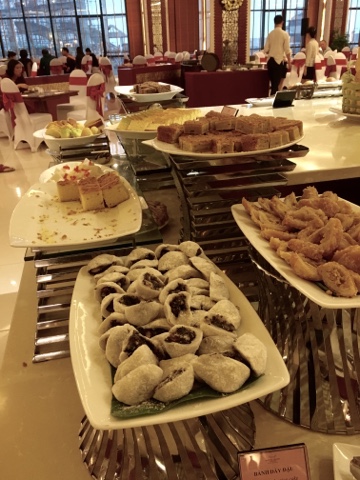 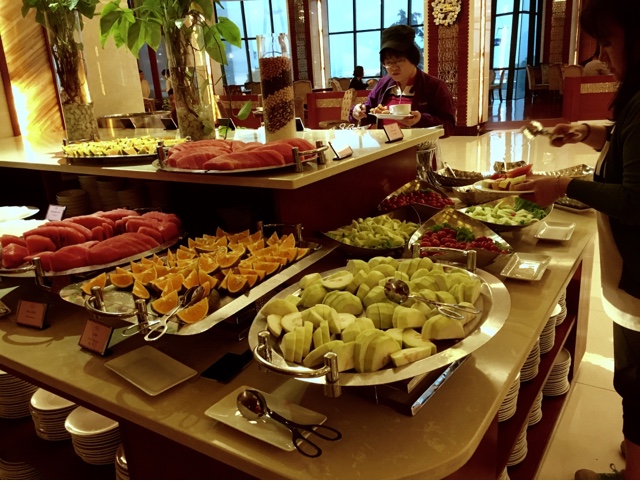 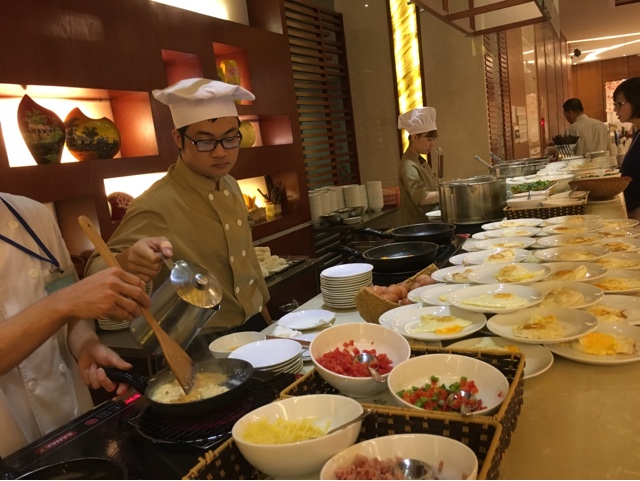 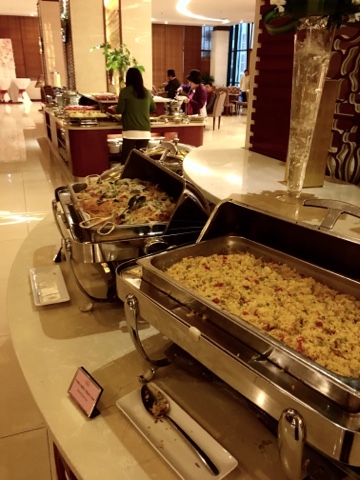 PS: When slumbering brother Chris reads this he’s gonna get a particular chuckle, knowing that this kind of behaviour isn’t completely out of character for me. See “French Lick Resort” exploit, which remains classified. And secondly, lelt’s pay homage to my dear Mom, from whom I’m certain Chris and I inherited a penchant for “honest snooping.” (purely for curiosity’s sake, in other words)
20.956529107.050074
Bãi Cháy Bãi Cháy