Skip to content
(note! If you’re reading this on Facebook, you may be missing a lot of photos! The cross-post app I’m using is kind of buggy. For best viewing, go directly to my blog, www.minglefreely.com)

This is all blurring together, and I’m frantically trying to keep that from happening. I’m blessed by exceptional jet lag, the very best kind, that wakes me up at 5am every day. Then I can go eat and write, and eat and write.

Sunday night, after months of discussing, weeks of vaguely agreeing, days of supposing, and hours of transacting, Chris and I became the owners of a Russian motorbike (him) and a Taiwanese scooter (me). Yesterday (Monday), we packed our bags, spent some time learning the language of bungee cords, a small triumph having failed utterly to learn Vietnamese. Three old dudes had to help me start my scooter, resulting in much embarrassment, laughing, bowing, handshaking, and smiling, always smiling with these people. God, I love them.
With bags strapped on, we revved up and, after about 43 wrong turns, we rolled out of Hanoi, the craziest city I’ve ever loved. I was privately hoping for less air pollution once we got on our way. Boy, was that a funny thing to hope for. 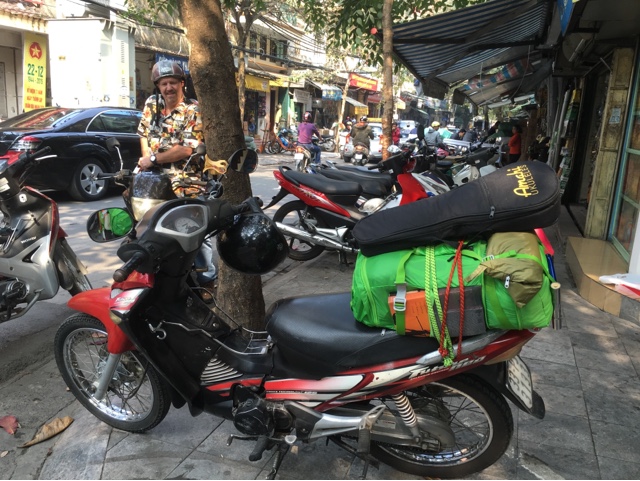 My ride. Very very happy with my bags and packing choices by the way. The bag isn’t big. The scooter is small. 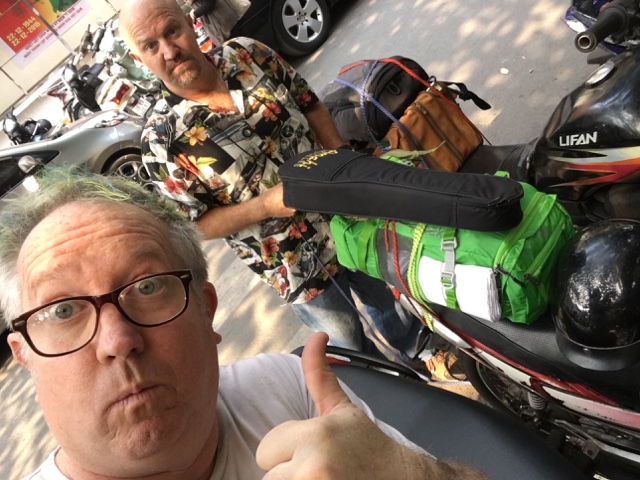 Is that a look of mild terror in my eyes? Not exactly. I’m still trying to find the right adjective for “this is crazy and we’re fools, but we probably won’t die, and it’s probably going to be a blast.” Chris has really become a magus of this. My brother. 🙂 <3
So… yeah —  Away we go.
We take out towards Ha Long, a popular upscale beach resort area that’s maybe kind of like Florida’s gulf panhandle? Or maybe Lake Tahoe? I don’t know. What I don’t know every day in Vietnam could fill an encyclopaedia set, but it doesn’t matter because everybody is so amazing. The language, woo boy, the language. It’s the first place I’ve ever been where I just … I give up, unconditional surrender. I don’t speak Vietnamese and I will not, at least not on this trip, so utterly different is it from any Latin-based language I’ve ever learned even crumbs of. So different is it’s bizarre, ironically, Latin-based notation (in print), with a practically scientific littering of accidents and phonetic notations, that I can’t remember any place names for more than a few seconds. 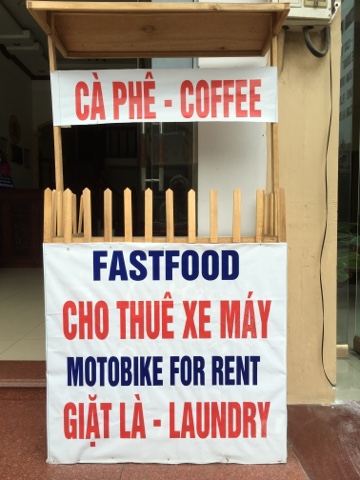 For instance, I’ve been writing all morning about Ha Long and every time — including earlier in this sentence — I have to look at Google Maps to remember “Oh, yeah — ‘Ha Long,’ that’s right…”
Anyway.
Rolling down the road. With many others. On bikes, scooters, motorbikes. In trucks, buses, cars, wagons. With them, boards, bags, boxes. Everybody getting from Here to There. All the time. Mostly we two wheelers stick to the right in what might be an actual lane or maybe it’s the shoulder. Most combustion engine vehicles have horns and they’re mostly used judiciously, not like in the US, where people honk as some sort of moral statement (America: “LONG HONK. You are WRONG and a BAD person”). In Vietnam, it just means “look out, I’m right beside you!” I love this. However, some of the big trucks have horns that are capable of sterilizing a mammal. Some of those truck drivers like their horns a little too much.
Surprisingly as it may seem, the roads are pretty well paved, or, failing that, they at least are surprisingly free of potholes and loose gravel. How is that even possible? Must not have gotten there yet. 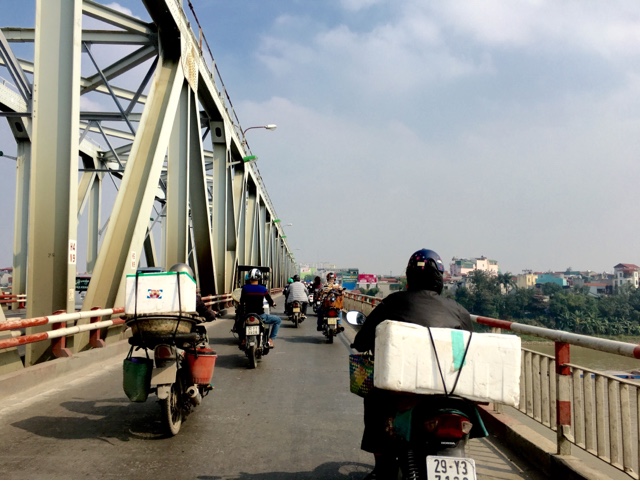 This is hard on the ass, and we were warned. We probably haven’t begun to learn how hard it is on the ass. We were also recommended to get Hondas, but the Jeffries boys are a little thick-skulled and we want what we want. (We come by that honestly, too –thanks Dad.)
Our first trek — from Hanoi to Ha Long (yes, I DID have to scroll back up to see how it was spelled, thank you) was expected to take 3-4 hours and that was exactly our experience. 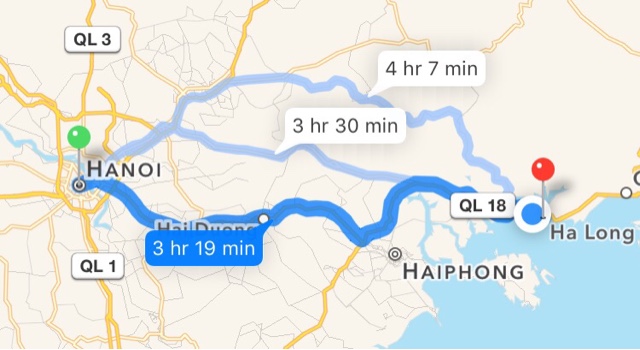 It’s loud, it’s windy. I have no idea how fast we’re going — it’s pretty normal for the speedometer to not work on these bikes. We’re going about the same speed as everybody else, which is maybe 30 mi/hr? All these motorbikes have 110cc engines so, yeah.  Again, yay, Communism, is what I say. While we in the west have a very very virulent opinion of the governmental philosophy, the word itself can be interpreted to just mean “We’re all in this together,” at least that’s what I think. Because we ARE.
And that’s why Chris and I are OK. No matter what. 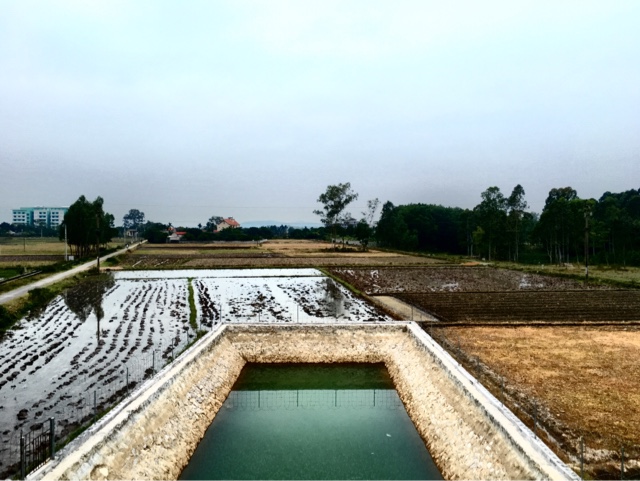 Our first stop is at one of hundreds of shacks and shelters that have big signs outside that say CO’M (rice, I think) and/or PHO (the ubiquitous noodle bowls that make the world go ’round and which I eat sometimes 2-3 times a day, gladly).
I’m hungry, and Chris is having some bike issues. You know, parts of the bike falling off, breaking, twisting, the possibilities are endless. The cool thing — actually there are two cool things. 1. These are simple machines. I sure as fuck don’t know how to fix/maintain them, but lots and lots of people do. We roll up and in no time, three gents are all over Chris’s bike shoring up this and that. Meanwhile, I’m admiring the spring rolls being tried up by the smiling Vietnamese girl. (Aside Let me say this, as a happily and faithfully married man: I live for the smiles of pretty Vietnamese girls. They make my heart explode and are worth more than any amount of gold. The smiles of Vietnamese women and girls may be the fuel that powers the universe. Here’s how you get somebody to smile: smile at them and hold their gaze. They will smile back, and look deep into your eyes. This is usually from 20 feet away and lasts for exactly A Moment. It’s magic, I tell you.)
OK, so the spring rolls.
NObody speaks a lick of English. I admire the rolls and they shake their heads offering me something else, probably Pho. My ears cannot understand this language, no matter how hard I try. I’ve heard the word “Pho” approximately 7 million times and yet somebody can be saying it to me and I’m, like, “huh? I’m sorry… what? say again.” She and the two gents (brothers?) shake their heads, then one of them points first at himself and then at the other two. and I get it: it’s their lunch. Then I point at me, raised eyebrows, nodding head. Next their pointing at me, raised eyebrows and the endless game of charades (thanks Mallory) has succeeded, and no amount of protesting will prevent them from plating up their dinner for me and Chris.
Pepsi is drank. Pho is eaten, too. They eat at their table behind us, and I give my umpteenth ukulele concert, something that is just the core of joy for me, because the people love it so much. (And, selfishly, I think that spreading this kind of good will might lower the odds of getting ripped off)j. If the Vietnamese people are familiar much with Western popular music, I haven’t made much headway into their preferences. I have been told that they have a peculiar penchant for “Hotel California,” but I don’t really like that song for ukulele. I’ve also heard “anything by the Carpenters” is enjoyed but Carpenters songs are HARD. The bang that I’ve been offering has been a steady stream of Elvis, Buddy Holly and Hank, Sr. This is partly because I can really really over-caricature the singing in a way that I’d be embarrassed to do at home. This is practice. They eat it up, like I eat Pho. On down the road, we stop to check directions, serendipitously in front of an old man hitting on a giant bamboo pipe. Once we make eye contact, he proceeds to pour us green tea, which is clearly complimentary, not a shill. A mom and her son walk by and I get out my ukulele, while Chris dazzles everybody with Google Translate. (Have you seen Google Translate, btw?) Amazing times occur in the course of 15 minutes.
We roll on as the sky grows dim. It’s very overcast here. Don’t really see the Sun, and in the waning afternoon, it’s like somebody just starts dialing down the sky.

When we roll into the outskirts of Ha Long, it feels like a triumph. Our first journey! We made it! In no time, Chris has found us a smashing … hostel? hotel? All I know is it’s got a polished marble entryway (like every Other boutique hotel I’ve seen), we have a private room, and it costs $12/night. It’s pretty dead here; it’s the off-season and we celebrate by finding the backpack bar, a watering hole for vagabond travelers essentially empty except for three saucy Romanians who love to laugh and drink, and speak impeccable English. (BTW: Thanks, World, for putting up with Americanismo, which knows nothing of your “foreign” culture and just hopes and vaguely assumes that everybody else will just speak English)
I sneak off after a couple Negronis and as many beers, because I fear these people have The Party in them, and I don’t. I throw Chris under — or maybe into — the bus of international partying and go for a walk on the calm yet mildly bustling streets of Ha Long before heading back to our hotel to turn in. 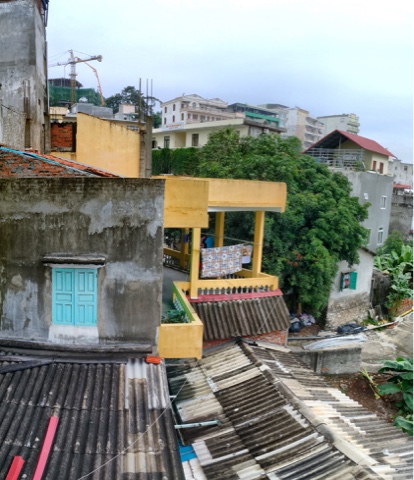 View out of our room. Careful with those blue doors — first step is a doozy.
Once I get back, I kind of thrill to find that our mattresses make Tempur-Pedic memory foam seem like a bag of feathers. These beds are foam and “bed shaped,” but hard like nothing I’ve ever dropped my bones on. Like, you could hurt yourself by plopping down. And you know what? I sleep great.
Best day of my life so far.
20.956662107.049783
Bãi Cháy Bãi Cháy