At 5:15 this morning I woke up frustrated. Just for the record, waking up at 5:15am isn’t that unusual and I’m grateful for it, but waking up frustrated in I Vietnam is, well, it’s just sad.

My frustration stemmed from an incredible clusterfuck that had been unfolding around my phone for 48 hours. I felt disconnected it was starting to get to me. Not to bore you with the details, basically, my phone — for which I had purchased an AT&T “Passport” plan to cover me abroad several weeks ago — wasn’t working and the plan was deemed — let’s be frank here — worthless. 100%. Even worse, it had somehow made my phone 100% incapable of making (traditional) phone calls. Yes, if you’re a geek, you’re saying “you could use wifi calling” and you’re right, but it’s hard to express the anxiety and inconvenience of being out and about without wifi.
This morning, after an hour and a half on the phone, sitting in the dark, pre-dawn dining room of our hotel, while Chris and every other guest slept, I was connected with an extraordinary AT&T CSR named Shayla, who got shit straight. She got the problems fixed, ironed out, resolved, and rectified. In short she kicked ass. Shayla, you listened, you learned, you understood, you acted, you resolved.
You cannot imagine how you’ve eased my mind. Now I can get back to the wacky wonder that is Vietnam.
And it’s only 8am here in Hanoi. Phone situation resolved, I began to once again see the smiles of the staff, to see and bask in the boundless benevolence of the Vietnamese people and those visitors who, like me, are delighted to be guests in this country. I visited with genuine cheer with an Indian woman and a Canadian, over the traditional piles of hotel breakfast food. Here’s (some of) what I had. Now I think maybe I’ll go buy a shirt. 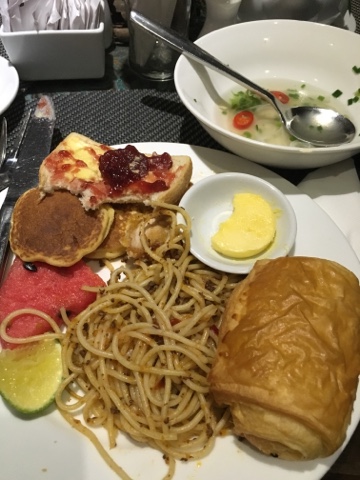 Outside it’s Vietnam, and today is the best day of my life. So far.