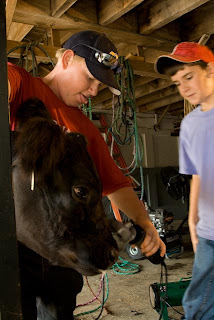 The other day, a fellow workshopper and I were talking about the amazing cross-section of people that are here, in terms of geography. Easily, folks from all over the US as well as places like Iceland, Burmuda and Europe. We were thinking about funny colloquialisms having both had experience with the oft-misunderstood NY’ism, the habit of saying “rightrightright!” or “yeahyeahyeah!” to indicate that you are “following” what a person is saying. But it’s frequently misunderstood as an expression of “hurry up.” It’s (usually) not.

Anyway, I learned how the San Francisco version of “yeahyeahyeah…” is a lethargic-sounding “yeahhhhhhh…” with a slightly glazed-over moment of contemplation. They mean the same thing: “I understand what yr. saying and I’m following you.”

Here, I’ve heard this funny colloquialism that I’m not sure is regional or generational. It’s the use of the interrogative: “Right?” It comes after a momentary pause, at the end of a sentence and doesn’t really beg an answer. It basically seems to be similar to the above.

No further comments on the topic of party-off-the-hookness are required at this point and conversants may now move on to the next topic.

PS: This picture also did not make the final cut. It is, however, a shining example of my attempts to emulate the fill-flash style of my teacher, National Geographic stalwart Karen Kasmauski. The idea is to use a strobe as fill-in lighting in a somewhat dark spaces, while simultaneously preserving the “ambient light.” Oh, and the ideal is that it not be apparent that a flash is being used at all. This is one of my better executions. Quite a great lesson.

0 Replies to “I keep thinking about sooo many things… right?”