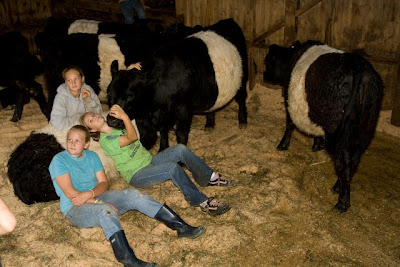 Belted Galloways are among the most curious and gentle bovines that I’ve ever experienced. Apparently, the bulls are regarded as even gentler still. From my first day at Aldermere, I found out how relaxing it was to be close to a pen full of “Belties,” if not actually in the pen, as the 4H kids were on MWF.

On my first day, I got there just as the kids’ work was winding down, and then it started raining. The Belties really aren’t any more fond of rain than these girls and everybody was in the freshly-sawdusted pen. Notice the girl who’s actually lying on top of a cow. This scene lasted nearly half an hour, as I recall. If the cows got close enough to be annoying, the girls would slap-slap-slap! them in the snout or just push them away. 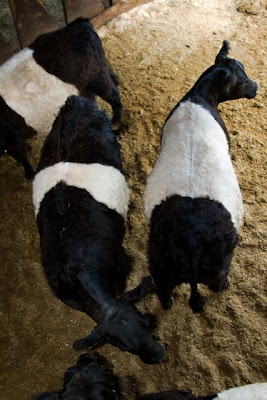 I had a different experience, just as I became convinced of the total serenity of the situation. One of the Belties who’d been kind of eyeing me with a bit of defiance, suddenly took a couple of steps towards me and butted me in the side a couple of times. It was a little disconcerting, especially, since she kept her eye on me and kind of followed me as I stepped away. Then she head-butted me again. I kind of quietly made my way out of the pen and over to where the kids were doing some other work and had this exchange:

That was my only questionable moment with the Belties all week long. I loved showing up in the morning and going around and smartly smacking them between the eyes repeatedly, sort of like you do to a cat’s tail end. They are just sooo sweet.

One more Beltie story: I was spending some time in a new pasture they are clearing on the back of the farm. It’s an amzing piece of land and basically rolls down a hill right to the ocean, with only a grove of trees in the middle. At the top of the hill is a Beltie pen and they have free reign of the in-progress pasture, which on this day was being de-boulderized by a backhoe/frontloader. You know, a big yellow piece of classic construction equipment. A real life Tonka Toy.

The cows stayed pretty much away from the backhoe while the farmhand was digging — I don’t know if that was because of volume (the thin’s pretty loud) or just because everybody should stay away from backhoes. But after he called it a day and left, I hung around and the funniest thing happened. The cows — about a dozen or so — were under their shelter, standing, lying, staring at me. After a long while—half hour or so—one of them sauntered towards the gate, and slowly they all followed. The lazed their way down the hill, stopping here and there to chomp some grass, before eventually making their way to … the backhoe. And they all congragated around it, and sniffed and licked it for at least 15 minutes before continuing down the hill. It was one of the brightest moments of my day, literally, because it had been cloudy and the sun had now come gloriously through. If you don’t believe me, see for yourself. I love them Belties.