Skip to content
(Facebook friends: Reading my blog is much better in its native form at www.minglefreely.com)

I feel like an explorer. An astronaut, maybe. Reporting from unknown regions. From far away. And it’s true. Everyday I wake up and It’s Vietnam Outside.

But today it’s a different year than it is at home in Kentucky, USA. In other words: “Duuuuuuuude…. It’s January 1, 2016 up in this bitch.”
More importantly, it’s breakfast time, and I’m writing to you with all the wisdom that a fairly hungover, hungry, uncaffeinated stranger in a strange land could posibly offer. Such are my gìts to you from the Future.
Let’s see: It’s bright here in The Future. I’m blaming that on the big windows and my hangover, but do not let that detract from your own soon-to-be-bestowed future = brightness equation.
It’s also kind of still Christmas, at least almost as much as it’s ever been, which is to say: completely manufactured. I will say that those who are concerned about the loss of the Big C in Christmas should come over here and stomp their feet, because these Buddhists seem to give not one fuuuck the baby Jesus. He’s nice enough, I’m sure many of them would agree. But the Viet people are niceness incarnate, so no need to mince over some kind of immaculate conception. The Viets just want a big decorative tree, a red and white Santa hat, too small, often with the world “Santa” embroidered on it (which is a little on the obvious side, don’t you think, Vietnam?), and, y’know — Jingle all the way. And what’s wrong with that?
It’s pretty great. In the US, we fight about it; they’re actually full of joy about it. Hard to argue with that in terms of the “reason for the season.” And anyway, failing a crèche (and I’ve seen not one image of Jesus in Vietnam, although Chris’s bumper car the other night in Tuy Hôa did seem to sport a lit-up cross on the back, so let’s just say “Chrismas” from now on, shall we?), 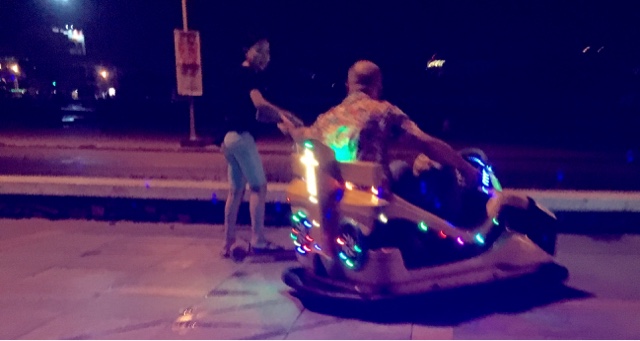 “Thank you for funny smashing into frightened children’s bumper cars. Now get out, and come again!”

They’ve got altars out the Yin-Yang — from along the glorious wonderful muddy country roads, all the way up to big city hotels, like this one. In fact, here’s Mick’s Favorite Altar Award #1 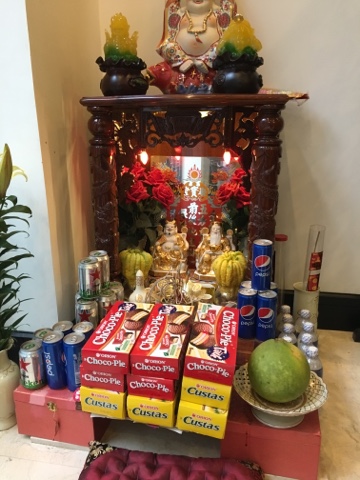 Lobby of the Legendsea* hotel. Baby Jesus don’t get Choco-Pies, does he?

(*Quick note: Last night, I heard the hotel clerk proudly pronounce the place’s strange name and she said “Lee-Jen-see.” So… get it? SPELLING IS HARD. Or  maybe somebody already has a joint called the “Regency.”)
Back to the altars and their offerings of food for the Buddha: I don’t know what happens if you’re dumb enough to try to take some of Buddha’s Choco-Pies, but I suspect it could be kind of embarrassment-inducing. Kind of like ambling into a funeral, snapping photos.
Which we did.
Yesterday. 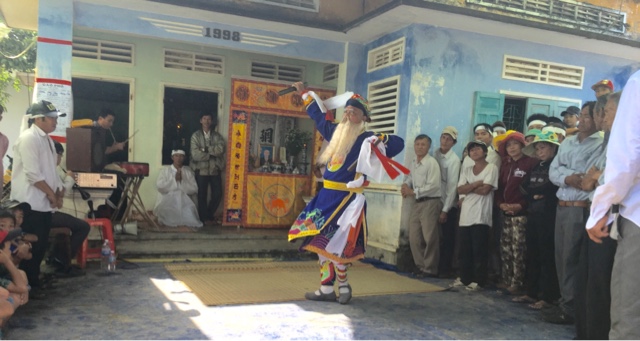 “Cool! Country dress-up party! No? Wedding? No? High School Graduation? NO?? Funeral! Come on in and take photos, though? Great plan! Sorry for your loss!”

“Thanks for insisting we come in and take pictures of your graduation or whatever. Say, isn’t that a coffin in the back room? Cause it sure looks like a coffin…” (not pictured, because I’m not that bad)

Oh, sorry — back to my report from the future. It’s great! I need more coffee and breakfast Phô, pronto. In a little while, I’m going to get my feet fixed up, in a plush pedicure chair. I found a place that has that type of chair, which hopefully guarantees that I’m not accidentally hiring a hooker. You can’t be too careful. I’ve resolved not to have a massage here because I just don’t know where that’s going. An Aussie friend told me that if somebody says “You want massage baby?” then cover your junk. That’s a handjob. A comma can make all the difference.
Nonetheless, I was offered a massage here at the hotel because last night I was the only one clownish enough to get up in front of a lobby of people with the staff emcee and lead the hotel NYE revelers in “some New Years songs,” as she requested of me. All they’ve got is ABBA’s “Happy New Year,” which she had sung or played over the lobby PA several times prior to drafting me. People seem generally pleased, but where do you go from there? “Some New Year’s songs?” Hmm, I didn’t think they’d know Deathcab for Cutie, and my rendition of Auld Ang Syne didn’t quite ascend to “It’s A Wonderful Life” altitudes — though the look of glee on Viet faces whenever I play ukulele makes it worth more than all the Dong in the world. Sorry — unfortunate word choice. It’s the Vietnamese currency. What do you want me to say?

But I’ve got a trick up my sleeve because I know The Song. And I told her. Somehow she produces sheets of lyrics of The Song. The Song that has enchanted young and old alike across the land, from the most backwater rice paddy burg right up to the cosmopolitan gleam of Panama City-like Nha Trang. The Song is magic. The Song is baffling. The Song is …. Leo Sayer’s 70’s hit “More Than I Can Say.” She and I practice a couple of times — a few feet away from where we’ll sing it together in the center of the lobby. Into an open mic, we practice it. So, you know, this is going to be a huge surprise to our eager fans, who, like me, are really there for the snacks and free booze.
But sure enough it slays. I never doubted the power of The Song. I hope one day to find out why in the fucking fuck every person in Vietnam knows The Song.
In fact, here it is, so “Happy New Year, Happy New Year,” something something something something something, whatever ABBA says.
http://youtu.be/6f6PLasc5a0
Finally: Despite being horribly underpracticed, I decided to drop the Frank Loesser Classic, probably my favorite holiday song ever, “What Are You Doing New Year’s Eve?”
Twice even. Because later after most of a bottle of Vietnamese rum that tasted like grapes and probably didn’t have any grapes in it but was full of booze, I played it again for some drinker than I South Africans on the roof of the Legendsea.
So happy new year, my loves. Don’t hate me because I get to celebrate it twice.  It’s only because this is the Best Day of my Life So Far.
12.235701109.195588
Tân Lập Tân Lập