Could I make it across the street? I was alone and had two motorbikes, four bags, two ukuleles, and two helmets. One of the motorbikes wouldn’t start, we knew that. The other one was anybody’s guess. Did I mention I was alone?

The fact is, we were kinda-sorta broken down. Or really “kicked to the curb” is more accurate. Voluntarily. 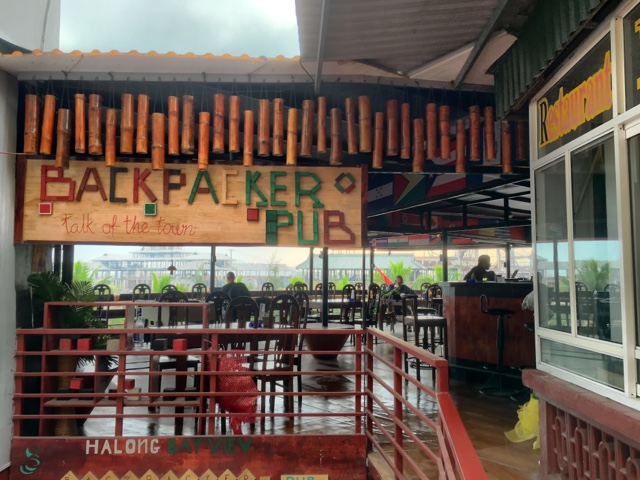 The Jeffries brothers planning and drinking facility, on Tuesday in Ha Long, before catching the “sleeping bus.” Center right, is “Jeff” Jeffries, planning incredible feats of travel, while his brother gawks and goofs around, mostly blogging and drawing crowds for ukulele concerts.

Not really, but let’s call it that for now. Chris had disappeared in a taxi to get gas — because anyone who’s ever seen any classic horror movie knows that the first thing to do in times of trouble is everybody split up.
“What kind of trouble?” is a question you’re probably asking. And at this point, I’d have to confess that “trouble” is a strong word which in this case more accurately translates to “signing up for an 18 hour bus ride, and bailing after 45 minutes and being dropped off on the curb in an unknown locale.” Great plan!
There’s one thing for sure: it was superior to the plan we’d thus far hatched, to our stark surprise.
The facts were these: We’d been helped by the most we’ll-meaning couple of women (sisters? never can tell) who operated a travel agency in Ha Long. They’d signed us up for the “luxury cruise” (simultaneously too luxurious and not luxurious enough for us, in retrospect. Next time: Pirate cruise) and had helped us now with our desire to make a giant geographic leap a few hundred miles south, so that we could ride our motorbikes in warmer climes AND be a somewhat more manageable distance from our destination of Saigon. (if you want to mince over the details, you will be welcomed into our daily miasma. Would you like a bowl of Pho with that?)
The answer: a Sleeper Bus, a common global phenomenon that Chris had experienced in Brazil. “Oooh, you’ve never experienced a sleeper bus! Oh, you’re in for a treat,” relished Chris. Some enticements followed: personal video screens, prone position, but the ability to sit upright, you know, these kinds of luxuries. PLUS they’re going to put our motorbikes underneath in the cargo hold. Great plan! What could go wrong?
Next stop: the bus station! Orrrrrrr…. a provincial storefront, where several guys set about removing our rear view mirrors and emptying our gas tanks, siphoned by mouth, which I have done as a teenager (story for another time) and which is awful. On the up side? They’ve got a few liters of gas which they promptly pour into their own scooters. Well played, gents!
The whole fam-damily is here, as is often the case and I decide that it’s time for — wait for it — ukulele concert #391. Because the Viets always lose their minds when I play ukulele. I like to play Elvis, Buddy, and ole Hank because I feel very comfortable singing to the point of parody in a cartoonish hillbilly voice. Also, Jingle Bells. Lots and lots of Jingle Bells. As usual, everybody acts like internationally famous. Cameras come out, relatives are called. 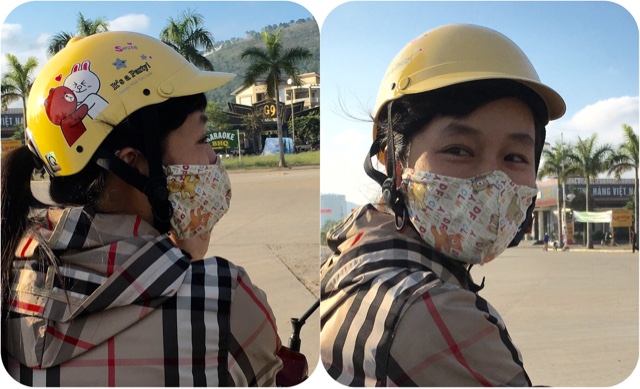 One of our travel agent girls, who I loved for her Hello Kitty helmet (with pony tail hole) and smiley Viet eyes, which are everywhere, I’m happy to say. On the downside, anytime she escorted us places that one would think would be in her bailiwick — bus station, repair shop, etc. — we spent a great deal of the trip with her stopping to ask directions. Or calling “her brother” for directions. Who knows? Every day here is blissfully, hilariously full of “who knows?”

Then, in a blink, the adults are gesturing for us to get on the bikes (the just-drained-of-gas bikes, right?), get our bags, go-go-go. I’m thinking “Um, did we miss the bus?” After an impossible hustle, during which I’m terrified for a moment that I’ve lost Chris and our leader/gas-siphoner, 100 yards down the road, I’m waved into a paddock area that is the bus station. I guess. 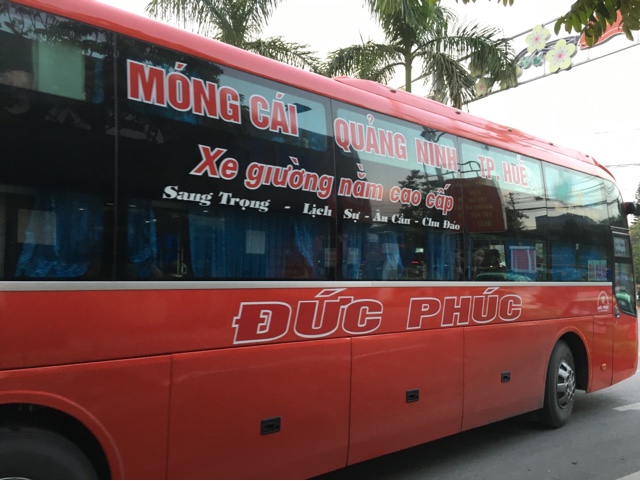 You have no idea the Purgatory that lies within.

There it is: The Sleeping Bus. The cargo bays are opened and our motorbikes are picked up and heave-ho’d into the bay.. on their sides? yes, on their sides. The bags of the riders are tossed in on top of our bikes. Hoo-Kay, no need for alarm, haha… 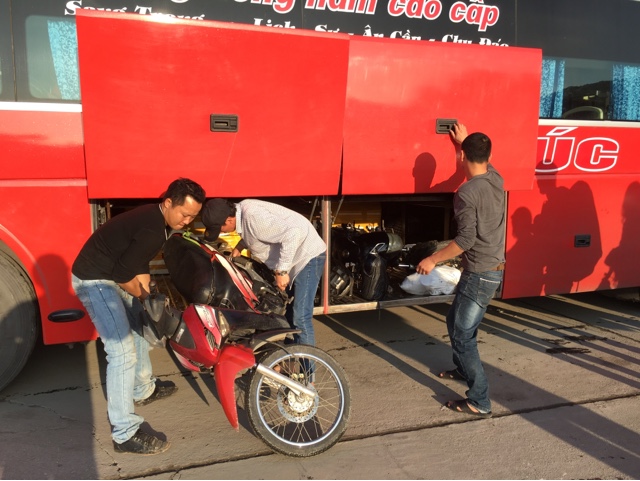 Now: its’ time to get on the Bus.. at the threshold: several “employees” sitting around. Oops! Shoes come off? OF course they do. Put them in this plastic bag? OK. Climb over you into the … aisle? But the aisle … it’s padding, crazy narrow and flanged on both sides and down the middle with double decker um, let’s call them chaise longues. And they’re all full that I can see. Headed back, back… having trouble squeezing in between… Viet employee guy kind of pushing me just a tad… aggressive nudging, we could call it, and split the difference. Back, back, still no empty “seats” … back, back … to … the very back of the bus. The guy somehow gets from behind me to in front of me, and heaves my bag, my ukulele, my other bag up into a 4-across hidey-hole that is 5/8ths occupied by 2 large boxes and a Brit backpacker couple, reclined (because there’s no other option) with heads at the very very back and feet facing forward. Next: the clear and unmistakable gesture from the attendant, with whom I share no language: “You go. Up there.”
OK, haha, but I’m…. uh … right now? Me? Up there? Yes, of course. I clamber up the 3 rungs (to say “steps” would be far too generous) and pile in, next to the Brits, who seem calm. Impossibly calm. Me, I’m breathing at a slightly elevated rate, looking for my brother who’s behind me, and being ushered into the down-low hidey-hole, completely out of my line of sight, next to a couple of travelers, if I remember correctly, from, oh 35 seconds ago. I see him disappear below me.
Up top: I lie back and soaking in the weirdness, the uncertainty. I think shock is setting in, actually. I do some calculations: maybe people will get off soon,” which doesn’t really calculate, I’m quite aware, but I need something. The bus starts rolling — rollicking, careening, honking, braking, jostling, honking and honking and honking. Is this real?
The Brit guy — pony tail, scraggly backpacker beard — says with inconceivable calm (resignation?) that they’re on for 16 hours and that probably, the staff will load more people on, because the aisles are padded and thus people could lie there. My cognitive processes are shutting down at this point. I can’t do math anymore, either out of overload or terror. All I know is, we got on at 4pm and are due to arrive at noon the next day. I’m beginning to privately wonder how I’m going to survive the next 15 minutes.
So I start thinking about drugs.
I planned for this! Hooray! I haven’t come to the other side of the world without at least the ability to sedate myself if necessary!
And this is looking more and more necessary.
First I conjecture and take inventory: Valium. Vicodin. That’s it for the “V’s,” let’s move on to X as in Xanax. I also have Hydroxyzine, which in addition to being an anti-nausea medicine which I terribly afraid I may very soon need, claims to be an anxiety medicine and also has “xyz” in it’s name. From the back of this bus ON my back, I’m starting to feel pretty near the end of MY alphabet so it feels fitting, from a poetry standpoint. Then I remember my phone. TEXTING.
And here’s how two brothers got out of a freaky situation: Texting each other from a distance of about 5 feet apart, but without any visual contact: 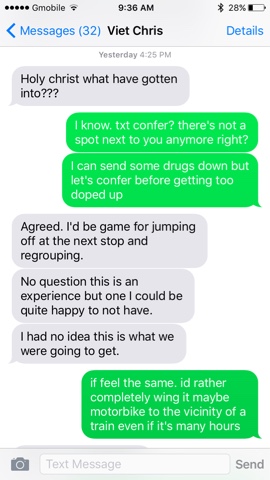 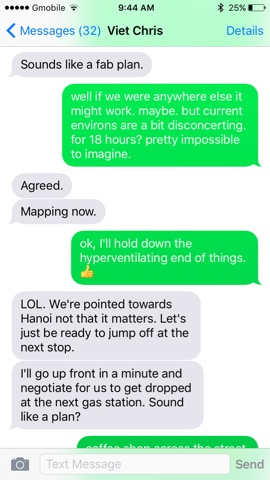 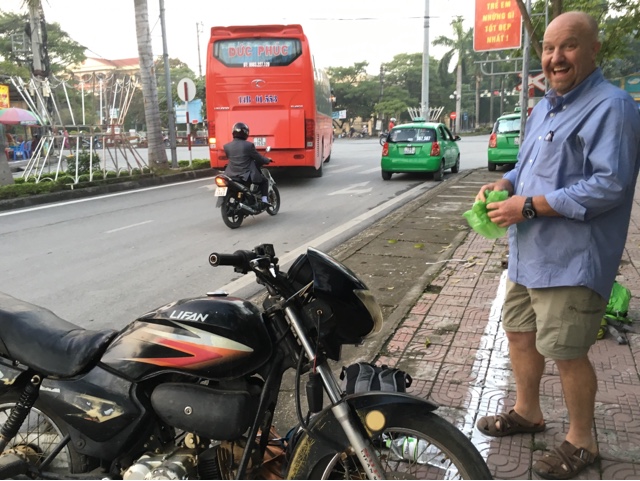 So, we didn’t actually wait until the next gas station. “Now will be fine,” is how it ended up.

And that’s how two brothers wound up on the curb in Uông Bí. Kinda freaked out. Making a plan to split up. Like in a horror movie. But ours turned out fine, I’m happy to say. Once Chris head out in a taxi for gas replenishments, I realized that across a busy street was the My Way Coffee Shop, which has many attractions but #1 was wi-fi — because it’s always about the wi-fi. With some elbow grease, I could get all of our bags and bikes …. over there. I just wasn’t sure what to take first. Finally, I got up my gumption and strapped ALL of mine and Chris’s bags to myself and to my scooter and shambled across an intersection to the promised land: My Way Coffee — just in time for the owner of the shop to notice this kind of frazzled looking American pushing, hauling, dragging towards his joint. Smiles. Wi-fi. Charades. Google Translate. Bam, everything is officially fine. Soon, we’ve got a hotel down the street and some time to fall back and regroup with some local TV. Let me tell you that the English-language edition of Korea’s version of Entertainment Tonight is inexplicably mesmerizing.
In retrospect, getting off the Sleeping Bus was 100% the right move. Doing so slowed our Southbound roll by a couple of days, it’s true. But as Chris said: “No question this is an experience, but one that I could be quite happy not to have.”
Could we have done it? Yes. Maybe. Fuck, I don’t know. I might have lost my marbles a few hours in, or: if having chosen to be rendered unconscious by meds, only to later wake up some handful of hours later still on that bus — that’s when the serious marble-losing might have happened.
So this was an experience that cost us each $50. A story came out of it, for sure. And I think $50 is a pretty fair price.
And that’s why this is still the Best Day of My Life So Far.