Skip to content
(Note 1: If you’re reading this on Facebook, it’s prettier on www.minglefreely.com )
Preface — MOM: DON’T READ THIS.
Ever since this trip started to hatch, the core idea was: ride motorbikes across Vietnam. To many this sounds absolutely bonkers, but let me assure you: it’s very very popular, done by thousands and thousands of travelers every year. It is, in other words, A Thing.
We’ve been motor biking around Hanoi since Wednesday. It is surreal in the extreme. If you’ve ever marveled over the murmurations of starlings, let me assure you, there’s a human parallel: motorbiking in Hanoi. Never have I experienced a more hysterical, ludicrous, life-affirming, attention-arresting, exhilarating, downright THRILLING way of getting from point A to Point B.
So, we’ve been practicing in Hanoi.
The original iteration was Chris as driver and me, on the back, as navigator. (Mom, you’re not reading this, right?! I’m serious) With an iPhone. Saying “turn left here — No, no, don’t… keep going straight… I mean — slightly to the right… ummm… never mind, never mind… just … give me a minute… ” (also, let me be clear for those turning pale with concern: my brother and I wear helmets and boots. Every time. I have not one time ridden two wheels in Vietnam w/o a helmet and boots and have no intention of doing so.)
Every street, some more than others, is a spectacular, careening symphony of individuals on scooters, “motorbikes” (that is to say: 110cc motorcycles — sort of what we called “dirt bikes” when I was a kid), cars, buses, bicycles, pedestrians and countless instances of “what in the world.” Most of what we’ll call WITW’s are motorbikes or scooters laden down with things like (actual sightings): a half-dozen freshly slaughtered pigs; 8 or more cases of beer bottles; an entire office furniture set; an entire family; a couch; a Christmas tree. 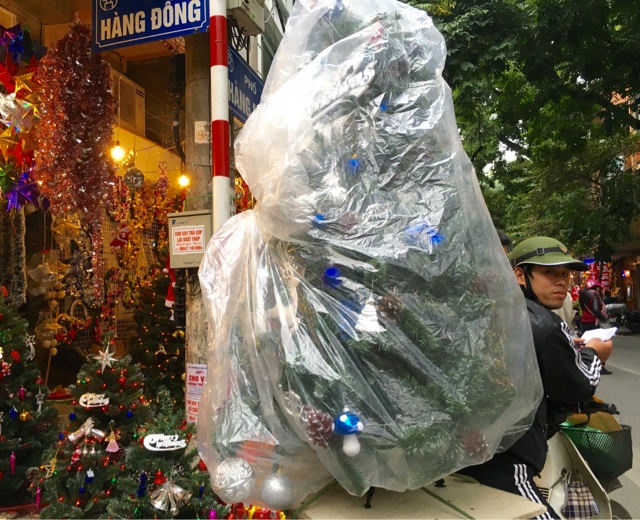 Yes, that street is called “Hang Dong.” Shut up. There are more important things to discuss.
Unfortunately, there are no real words to express what it feels like to negotiate this kinetic landscape on a motorbike. But I’ll tell you this: It’s hugely invigorating. If you’re a little bit ADD or have a very active brain, you feel like you’ve come home. Every minute, every second, every moment is full of challenge, promise and potential consequence. Oddly enough, and counterintuitively, the potential consequence “I might die,” is not really at the forefront. And this is where words, almost fail: It’s just … not like that. 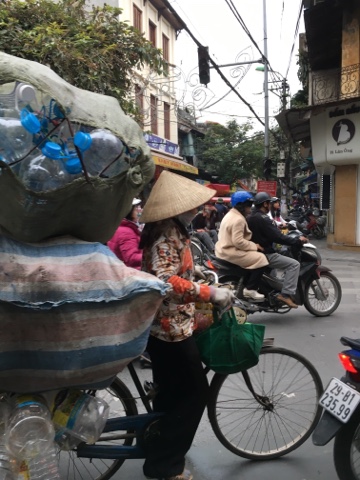 In the midst of this chaos, this fucking bananas way of getting around, there is simply no “road rage” that I’ve yet seen. Imagine that for a minute: Everybody is simply trying to get where they’re going. If you’re in the way, there’s the most subtle of negotiations, the tiniest of gestures, movements, somebody slows down, somebody goes around, a horn is beeped if “contact” looks imminent (hasn’t happened yet). Nobody yells, curses, or glares; the closest thing that we’ve get seen to an asshole on the road is simply the occasional person who zooms down a road laying on their horn (“beeper” is more like it) constantly. And that’s not common.
I can’t account for it, but it’s goddamned glorious. For all the perceived mayhem, I feel a calm, like everybody is working together to get everybody where everybody is going. And I might go so far as to observe this as another way of thinking of communism. Because I’ll tell you this: the anger, the rage, the moral indignation which is directed at me (and which I sometimes dole out, let’s be frank) in the US? It’s simply not present here. It’s somehow supplanted by the

murmurations of a culture on wheels. Usually two of them.

Yesterday was my first day to drive a scooter, as Chris and I continued our investigation into buying the bikes we’ll ride across the country. As he rented an actual motorbike to try out, I was promoted to sole driver of the scooter that I’d thus far only served on as navigator.
We both meditated on this.
He was losing a navigator, I was becoming a driver and we were doubling all variables for mishap and confusion.
Deep breath.
I told my brother: “OK, let me take a minute here, because if I’m being honest, I have to say that I’m just a little bit scared about this.” The exhilaration I’ve felt as navigator was always bolstered heavily by the fact that Chris was, you know, doing the actual driving. Conversely — absurdly, I’d say — he claimed the same thing about having me as navigator. 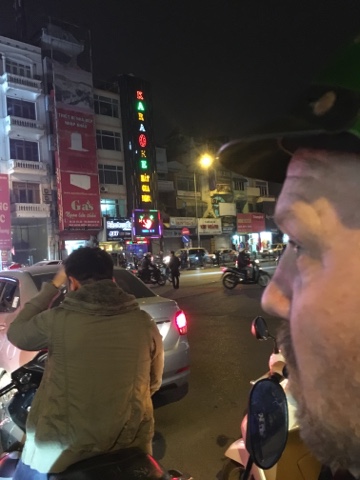 Let me say this: my brother has driven this scooter like he was born to do it. Through rush hour traffic that exceeds everything I’ve described here, with a steely calm that inspires the same in me, when I’m not giggling in raw disbelief of our situation, that is, either in the mire of rush hour main artery every-which-way traffic or the epic mystery of Hanoi’s endless alleys, which, incredibly, are often represented in Google Maps. (You didn’t forget, did you, that I’m on the back of the scooter, with an iPhone in one hand, and the other on the back rail or my brother’s shoulder, Vulcan nerve pinch style, only a physical expression of  occasional moments of, ah, tightness, right?)
Anyway, I sucked it up. I took a few test spins in the relative calm of the baby duck alley streets around James Motorbike, where we’ve felt most comfortable “shopping.” James seems like a standup guy. And we’ve seen him actually work on bikes which isn’t as common of a sight as you might think) 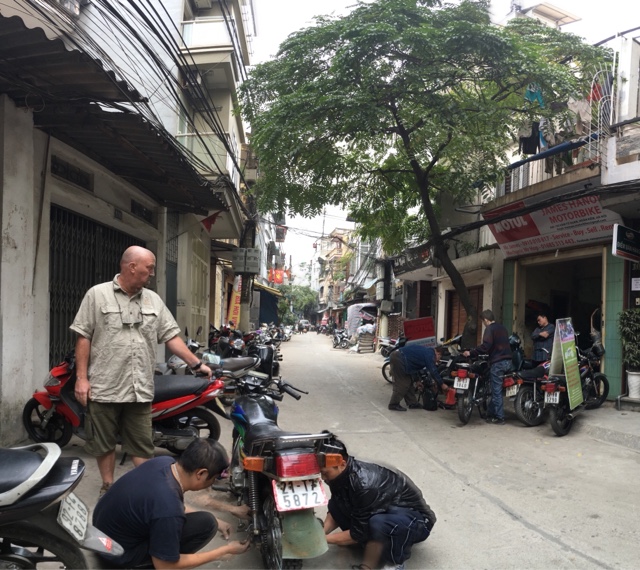 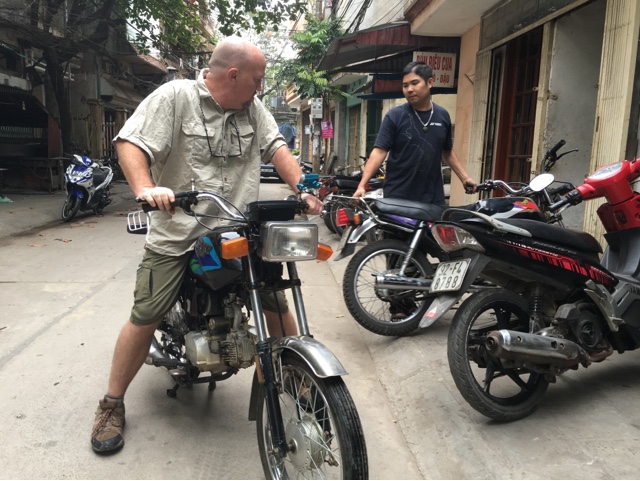 And so now? I’m a driver. And, somewhat against my private fears, I love it. The thrill of it — the micro decision making — is deeply satisfying to my brain. Riding a motorbike (a scooter in my case, I’m sticking with a scooter) on the harried streets of Hanoi scratches a very deep itch that I have. I feel like I’m using my brain, my reflexes, and all my powers of Gladwellian “blink” decision-making to the hilt. And that’s a pretty satisfying feeling, one that I think is increasingly elusive in the modern world.
Put more simply: riding motorbikes in Hanoi is a spiritual JOLT. And sometimes a physical jolt. But we really strive for the former, I promise you.
Best Day of My Life, So Far.
(Note: Since I seem to be adopting this phrase, let me once again give full credit to the under-celebrated eloquence and aplomb of Mel Smyth, one of my favorite word users)
21.035401105.84888
Hàng Đào Hàng Đào