One of my favorite things about doing my radio show, Trivial Thursdays, is that it is the perfect nourishment for my appetite for bits and pieces of our world; I’m always learning things preparing for each upcoming show.

Preparing for this week’s show, I noticed that it was the anniversary of the death of Karen Carpenter. She died in 1983, at the age of 33, of complications resulting from Anorexia Nervosa, becoming in the process, the most famous casualty of a peculiar disease that most people had never heard of.

What surprised me is that I chose to meditate on Karen the whole day.

She’s such a distinctive and complicated character in American popular culture, and there are aspects of her life and plight that are compelling to me, but I don’t always know why.

Sometimes I do. For instance: I wanted to play a musical instrument since my youngest days of grade school. In 3rd grade at Masonville Elementary, students opted to begin Flutophone, which was a preparation for 5th grade, when we would get to choose a “real” instrument. It wasn’t unusual for me to be found in those young days pretending to play the instrument that I intended to choose when the magical day came: the Flute. I don’t know why, it’s just what seemed the coolest to me.

But here’s the thing: When that day came, the most unexpected thing happened. We lined up and one by one, announced our preference to the teacher, who then handed us our preferred trial instrument. When I said “flute,” the teacher dismissed my preference, insisting that I ought to play trumpet, because flute was for girls.

So I played trumpet. And I was a truly shitty trumpet player, even before I got braces, which just added insult to injury where my trumpet-playing was concerned. I quit band a few years later. Who knows what kind of flute player I would have been? I wish I could tell this to that teacher. Obviously, I still think about it from time to time.

And so, in some small way, I imagine that I can relate to an aspect of the plight of Karen Carpenter: In addition to having maybe the most recognizable voice in popular music (Okay, Sinatra), Karen was the drummer for Carpenters. But as they became increasingly famous, she was pressured to move towards the spotlight and to be more of a girl.

On the well-trod path to Rock Star Heaven, Karen was a different kind of fatality. She didn’t OD or choke on her own vomit. She didn’t die in a plane crash. It seems like Karen was just crushed to death by the star-maker machine. I’m sure I’m over simplifying this, but it’s my blog, so I’ll do what I please.

And there are many things about Karen’s story that I find interesting and kind of literally unforgettable (insomuch as I continue not to forget them).

Obviously, her voice was uncanny. I still am amazed that in a world where we hear thousands of singers of all sorts, nobody sounds like Karen Carpenter.

Beyond that, was her ability to “own” a song. She didn’t write any of those songs, I don’t believe; Her brother Richard wrote some of them. But the gems were generally penned by Burt Bacharach or Paul Williams, both of whom are the biggest of guns, when it comes to the American songbook. And yet — when you listen to those Carpenters recordings, it’s hard to imagine that those songs aren’t completely about Karen.

Which they are not. 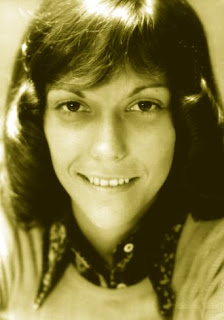 A connected tragedy, I think, is that there’s no way that we’ll ever hear her sing without the albatross of the colossal and misguided arrangements of nearly all of the Carpenters material. How I would love for Rick Rubin to have gotten ahold of her and stripped it all away, as he did with Johnny Cash and Neil Diamond. (I concede this wish is flawed since Karen wasn’t a songwriter per se. but somebody could’ve worked something out)

And on a related note, it’s easy to hate Carpenters (they apparently chose not to use “the” in their name, btw) for their marshmallowy new sound, and especially its timing. In many ways, their music was the Downey-scented replacement for the dying vibrant Age of Aquarius/Woodstock dream, and the activist/flower power music that went along with it. In effect, Carpenters was the sound of the mall, before the mall had even been built.

And again — that’s unfortunate because … that voice. Such a loss, on a variety of levels.

As a final note, for all the reasons mentioned above, the catalog of Carpenters is deeply flawed: grandiose production, unnecessary vocal overdubs, often-misguided material choices, dated-sounding orchestral flourishes. But the real tragedy to me is how great it could have been. There are gleaming facets of brilliance in practically every song — and they are simultaneously burdened and scarred in an assortment of ways.

So, finally then, we’re left with the songs. Which Carpenters songs are really just closest to right? Here’s some of my favorites, not in order:

Finally, there are a couple of pop culture things that a Carpenters fan might want to consider. One is the indie-rock tribute album If I Were A Carpenter. The other is somewhat more controversial, and that is the alarming Barbiedoll-acted biopic by Todd Haynes called Superstar.