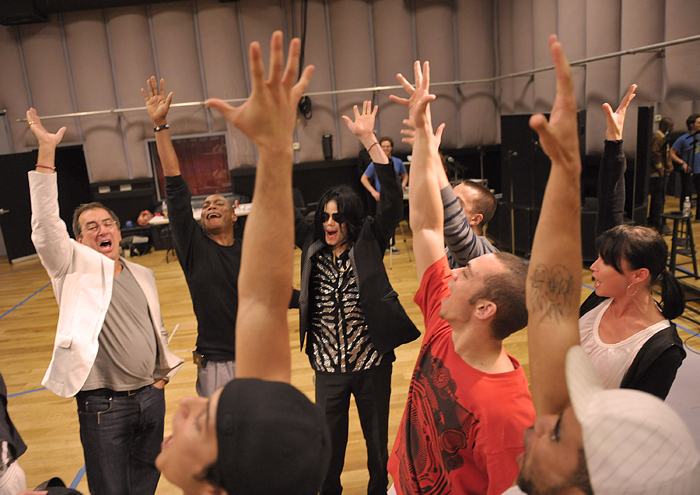 When I first heard about Michael Jackson: This Is It, my initial reaction was well, they sure hustled that out. And I wasn’t particularly interested.

It seemed incredibly calculated to play on the death phenomenon of The Gloved One, so it wasn’t too hard to roll my eyes. Also, the hype was such that I sort of assumed that it would be impossible to get tickets.

A week ago, I realized that wasn’t the case and that, in fact, it was easy to see once the initial frenzy wore off.

Lucy and I went to see it tonight, and let me just say: If you are a fan of concert/insider/performance-type movies, you should see it.

There are a number of reasons why:

And this is a “behind-the-scenes” movie, which I’ve always generally loved. In addition to the compelling character of MJ — and the bittersweet nature of its circumstances (which is never mentioned and I applaud the producers for this) — watching the consummate professional musicians, dancers and technicians do their stuff is compelling to me.

Just like any documentary, it’s important to understand that it’s all completely calculated. That’s the art of the documentary; not that it’s untrue, but that it is the art of editing. But even so, you get to see these people working at their craft. And it pretty endearing. Also, you can’t leave without feeling the colossal bummer for these people who were about to go on tour performing with Michael Jackson, probably the most famous entertainer in the world.

These people aren’t acolytes, either. They’re clearly working professionals. They’re eminently employable. But this was certainly a gig to be proud of. Or, would have been, anyway. And you can definitely see that they are in awe of MJ.

So, the magic of this movie — and I would say there is magic — is this: it’s not really about Michael Jackson. It’s more of the anatomy of staging a giant concert touring show. Put in the middle of that, this guy, this weird amazing unique dead guy.

And it makes for compelling viewing. (if a little too long, I must note).