is the sound of a March Madness Marching Band rehearsal.

It’s the sound of the percussion section keeping time, as Tripp Bratton our conductor, arranger, and musical director works through assorted arrangements with the different sections. I think it’s one of the unsung (and unlisted) jobs of drummers to keep time for these exercises, and it’s actually one that I get great satisfaction from. Not only do I get to make noise (and I get to make alot of noise in the band, as the bass drum player), but I’m also providing — in my mind — a valuable service that requires very little effort.

I’m reminded of Robert Fripp’s League of Crafty Guitarists, an ensemble of guitar players who have the uncommon honor of playing with one of the giants of progrock. In particular, I’m thinking of the fact that the LOCG ensemble includes a player who doesn’t play, who’s job is to “keep silence” — which is as important to the music as the, um, non-silence. 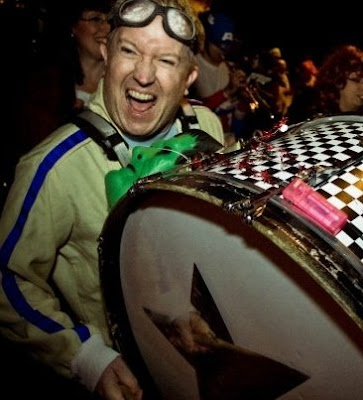 I feel this way when I keep time for rehearsals.

It reminds me that the band is a collaborative effort, through and through. When we perform, I’ll get to make huge noise, guaranteed. That’s a fact. In the meantime, there are other responsibilities. Like keeping time.

Our rehearsals have become increasingly a thing of wonder. Tripp has upped the ante with every new selection that he adds to our repertoire. At first, he catered to the unavoidable fact that many of us were rank amateurs or at least — years out-of-practice former high school band geeks. Over the last year, Tripp has gently begun denying us that luxurious excuse and come to expect us to learn to play more complicated music.

It’s a challenge that the band seems entirely up for, and I’ve watched and listened with delight as the horns and winds, in particular, have answered the call — learning and practicing with Tripp’s patient supervision.

I just play bass drum. But I’ve taken a personal delight in relegating myself to his instruction. It would be easy enough for me just to bang out a beat — improvised — and the temptation is certainly there. But there’s a difficult-to-describe feeling of satisfaction that I get from asking Tripp “what I should play, what would you like me to play” — and then playing it.

I find that all too often, by doing so, I’m made privvy to an aspect of the music that I might never have heard had I just banged out a beat.

Thanks to Tripp and to the members of March Madness Marching Band for a rare and unique opportunity for fun, learning, and camraderie. It’s just magical.

Photo credit: Thanks to Meagan Jordan for the wonderful image!

0 Replies to “the Madness of Marching”