I feel so out of touch with blogging, and I guess I have myself to blame, though it’s easy to blame Facebook. Or Facecrackbook, as my pal AliThinks says. Taking a look at her blog this morning is actually what has inspired this post.

I’ve been “busy” for so long now that it’s probably well past sounding important and gone to just being annoying to anybody who hears it from me. What is this “busy” thing all about? I’ve twice seen this delightful programmer/lecturer named Phillip Kerman who decries “being busy” as a form of disorganization. I don’t disagree, and my office is currently a testament to complete chaos.

I feel like I work for whoever yells the loudest, and I would really like to get out of that. But I’m not currently wired that way. I keep trying to check all the things off the list which has never worked to my knowledge. I don’t know how to be empowered by the list and yet not be a slave to the list. Brother Chris has some arcane approach, something about “put big things on the list. and then at the end of the day, throw away the list. start again tomorrow with a new list.”

Lately, I’ve done so much cool stuff, though. I would like to return to my once-upon-a-time modus operandi of using my blog as a kind of personal scrapbook.

Right now, I’m trying to finish a blur of work projects, but what I really want to be doing is culling and sorting my Burning Man photos — which are over three months old. Bah. They’re coming soon.

Hang on, Gypsy Queen. Your photos are coming. And my memories. 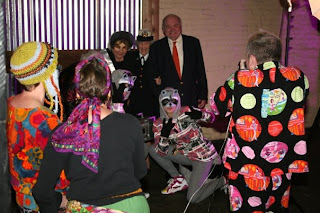 I had a recent thing happen that caused my blogpride to swell, though. I did this Zombie Photobooth thing again this year — once for SWAvm, and then again for the Beaux Arts Fall Ball — to great delight, even my own. (actually, technically, I did it three times but due to some miscommunication, the original gig — at 3rd Street Stuff for Thriller — was kind of a bust. But I will post the few photos that I shot)

It’s a kind of tricky digital setup and as I prepared and made sure that I understood WTF I was doing, I did a google search to find a tutorial on “tethering” (shooting directly from camera to computer), and I found … a link to my blog. Because, shockingly, I had actually written a well-notated blogpost on how I did it last time. It was like Past Mick leaving a breadcrumb trail for Future Mick.

Anyway, fuck Facebook, for reducing my blogging to one or two sentence bursts that are written in a creepy 3rd-person voice. (and were I ON Facebook right now?* I would have typed “fvck” instead of “fuck” because of a fear of reprisal from the Faceless Facebook management)

Big love to blogging. I think I can have my coffee now.

*Note to those of you reading this on Facebook though the atrocious “Notes” feed: I didn’t write this on Facebook. I’m wrote this on my BLOG. It’s called Mingle Freely. Feel free to visit it, as I worked hard on it for years… until Facebook distracted me with its irresistible pointlessness. Probably, like me, you have other things that you could do, but are weedling away the hours on this infernal timesuck. I wish I could quit it.