NOTE! If you’re reading this on Facebook, I recommend that you go to my blog directly. Facebook tends to mangle bolding and italics among other pretty things that a graphic designer like myself takes very seriously! Go read this at Mingle Freely! The blog of Mick Jeffries!

The odyssey has begun — My brother, Chris, and I are headed to Burning Man 2009 in the Black Rock desert comma middle of nowhere comma Nevada. There will be at least 40,000 people there.

It’s not the kind of thing you decide to do overnight, at least — not if you live in Kentucky.

Me, I’ve wanted to go to Burning Man since at least the mid-90’s shortly after it started blowing up. I can still picture WIRED magazine’s cover (may even still have it) and the headline and Bruce Sterling article: “Greetings from Burning Man: The New American Holiday”

Thanks to Facebook, once the opportunity arose this year (largely due to my brother having bloomed into a midlife momentary vagabond—albeit a very high-tech one — and recently becoming the owner of an Airstream trailer — we call her “Marge” and you’ll see plenty of her plenty later), I started reaching out. And I quickly found Kentucky Fried, the loose affiliation of Lexxies and Lexpatriates with whom we’ll be convening in 7 short days. But not just a loose affiliation, Kentucky Fried is a bona fide Burning Man theme camp, and as such we’ve got a sweet spot in Black Rock City at 3 o’clock and avenue F. Take a look. Kentucky Fried is also comprised of at least four ER doctors, a psychiatrist, and an opthomologist. No, this isn’t a Rainbow Gathering, folks. 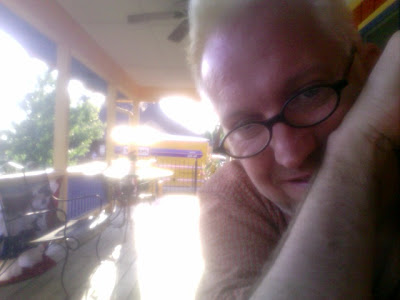 Chris and I are the early arrivals, too, which in and of itself is exciting. Burning Man begins at 12:01am August 31, but we plan to be at the gate at 6pm August 30, with our valuable-as-gold early admittance barcode in hand.

First, though, the Brothers Jeffries are gonna drive across the heartland, with Marge in tow, full of gadgets, gizmos, a couple pimped out bikes, more costumes than you can imagine, cases of Ale-8-One and the beloved and delightful Homer. (Homer isn’t going to Burning Man. No doggies, sorry!)

Right now, I’m sitting on the deck at my parent’s house in Owensboro. Behind me is the Penske rental truck (12′) that I had to rent to get the stuff here, to meet Chris. Not because there’s that much, but because it was the smallest truck that I could rent one-way from Lexington to Owensboro, silly.

Stay tuned. I’ll be blogging, Facebooking and tweeting (follow mrtoastey) our 3-week adventure and would be delighted to have you along for the ride.